Happy Easter everyone!  I know most people don’t think of Mexican food when Easter rolls around, but 1) it’s my family’s favorite cuisine, 2) my niece Audra will be here and she loves our Denver Style Green Chili Gravy, 3) we’re feeling a bit homesick for Denver right now and we have a quart of gravy in the freezer.  We’re still going to make deviled eggs, but this year we’re spicing them up by replacing the sweet relish with our homemade pickled jalapeños.

If you’ve ever been to Denver, you probably noticed that just about every restaurant has a version of green chili.  If you’ve never been to Denver, you should go and you should eat as much green chili as possible while you are there.  You can get it in a bowl with flour tortillas on the side or you can order a burrito smothered in it.  It’s usually made with pork, but some folks make it with chicken and, of course, there are vegetarian versions.  My mom always made it to smother burritos and it has been a favorite since she found and clipped the recipe from the Rocky Mountain News more than 30 years ago.  We still have that clipping!

See the recipe for Denver Style Green Chili Gravy in Preserving the Season.  It makes a lot and freezes well.

Because we are having Easter Brunch, we thought we would make a lighter dish of sopes, rather than bean burritos smothered in the gravy.  Sopes are thick corn tortillas formed with a little lip around the edge to hold in the filling.  They are Not Quite a Galette, but they are a round corn cake of sorts and I learned the technique by watching Pati Jinich (she’s the cutest!) on YouTube- click here for the video.  Forming the Sopes is as easy as Pati makes it look.  We are filling the sopes with refried beans, topping with Green Chili Gravy, shredded lettuce, Mexican crema, queso fresco, avocado and Cholula.  Love Love Love!

Heat a comal or cast iron skillet over medium heat.  Mix and knead the masa harina, salt and water with your hand until it is soft.  If it is dry, add more water.  Divide the dough into 12 small balls and set aside covered with a tea towel.  In the video, Pati uses a tortilla press but I found that I had more control over the thickness using a rolling pin.  Place a ball of dough in between two pieces of plastic wrap or parchment paper and press or roll out to about a 1/4 inch thick. 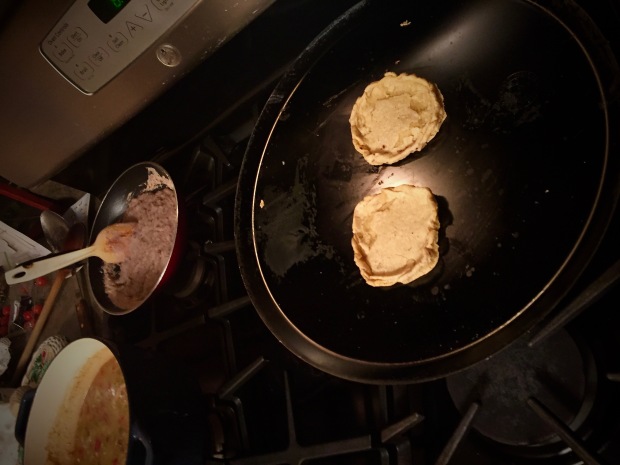 When they are finished keep warm in a basket lined and covered with a tea towel. 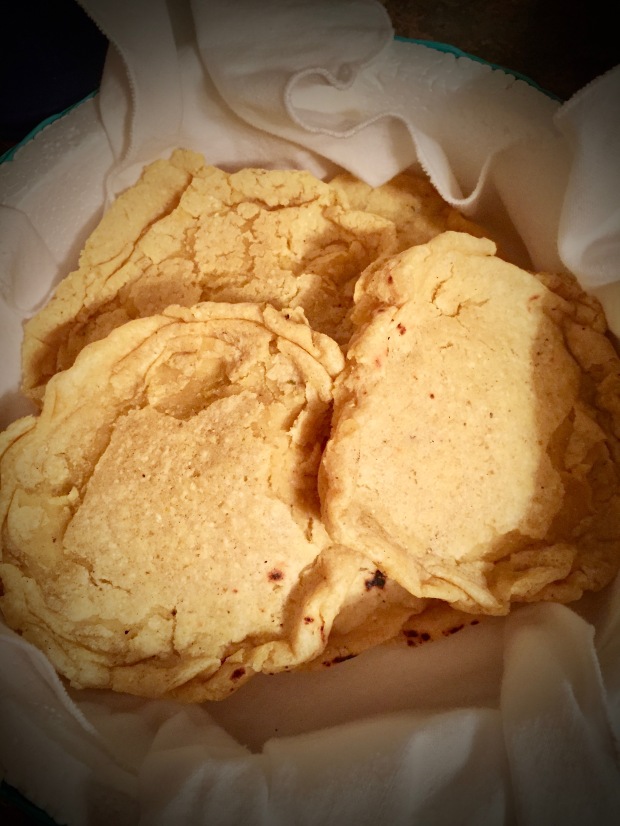 This site uses Akismet to reduce spam. Learn how your comment data is processed.

I’m a little obsessed with mortadella. Next up, pineapple, pepperoncini and mortadella 👌🏻 #hatersgonnahate #nationalpizzaday
Mortadella & Salami Ricotta Rolls
Is there a better WFH lunch on a frigid day?
I’ve attempted multiple times to repeat this perfect potato roll. It’s so frustrating that I can’t get it right.
I love making ciabatta 🍞
Tess’s Land Race Currant Tomato Galette. Thank you @treatbelly for the idea. I added a base of @hillacrespride ricotta mixed with pesto that I made with @muthfamilyfarm basil. These tiny tomatoes from @migardener are little flavor bombs 🍅
Holy Moly @hillacrespride your Merguez sausages are soooooo delicioso! I stuffed some grilled slices into yesterday’s pitas with a relish of grilled peppers, shallot, fennel and green garlic and topped it all with tzatziki 😘👌🏻
If you know you know 🥖🧈 🇫🇷🧂
I’ve been experimenting with baking with #kamut flour which I bought online from @thefoodnanny. So far, I really like the results I’m getting. Today I made these pita breads with a recipe by @alexandracooks. 🥙 Check out the puff!
Should this just become a pizza everyday account? Broccoli rabe and sausage pie. #organic #kingarthurflour #whiteoakpastures #raoshomemade #andyboybroccolirabe #cuisinart
Yesterday’s #shrovetuesday pancake brekkie. @doriegreenspan ‘s Swiss chard pancakes 💚 #putaneggonit 🍳 #basicallyasalad #galette #doriegreenspan
Ohhh it’s #nationalpizzaday ✌🏻❤️🍕 #notquitegalettes
Today I turned to dough to try and cope with yesterday’s heartbreak. This is a Pullman loaf (pan de mie) using the recipe available on the @kingarthurbaking website. My house smells incredible. Let’s pray for peace. 💙 #organic #thankyougeorgia #25amendmentnow
Sausage Egg & Cheese. Biscuit recipe from @girlversusdough, breakfast sausage and eggs from @hillacrespride 🙌🏻 #notquitegalettes
Chocolate Cherry Butterballs, a retro classic updated for 2020 with @luxardousa Cherries 🍒 and @ghirardelli Dark Chocolate Chips #notquitegalettes link in bio xo
We absolutely adore @jamieoliver at our house. Last night we made his #sausageandmashpie for dinner. We made half a recipe because there’s only two of us and we still had some leftover which we had for breakfast with a coddled egg 🍳. Added Napa cabbage from @muthfamilyfarm to the filling with beer sausage from @hillacrespride
Plum Dumplings! Made with Italian Prune Plums. So fun to make and so delicious! 💜 #italianplums #plumdumplings #notquitegalettes #christmasevedinner Link to the recipe in bio.
Today would have been Julia Child’s 108th Birthday. To celebrate, I made her Blueberry Clafoutis. Recipe linked in Bio. #njblueberries💙 #organic #blueberriesfromHammonton #notquitegalettes #juliachild #masteringtheartoffrenchcooking #muthfamilyfarm
Zucchini and Squash Blossom Galette with Garlic Scape Pesto and Ricotta. Link to recipe in Bio. #youcangrillit #hurricaneisaias2020 #nopowernoproblem #organic #buylocal #collsmkt #thankyounjfarmers
Power’s out! So galette on the grill? Ok... what could go wrong? Recipe tomorrow #hurricanisaias #thisis2020 #planb #resilience
Join 21 other subscribers
Loading Comments...
%d bloggers like this: